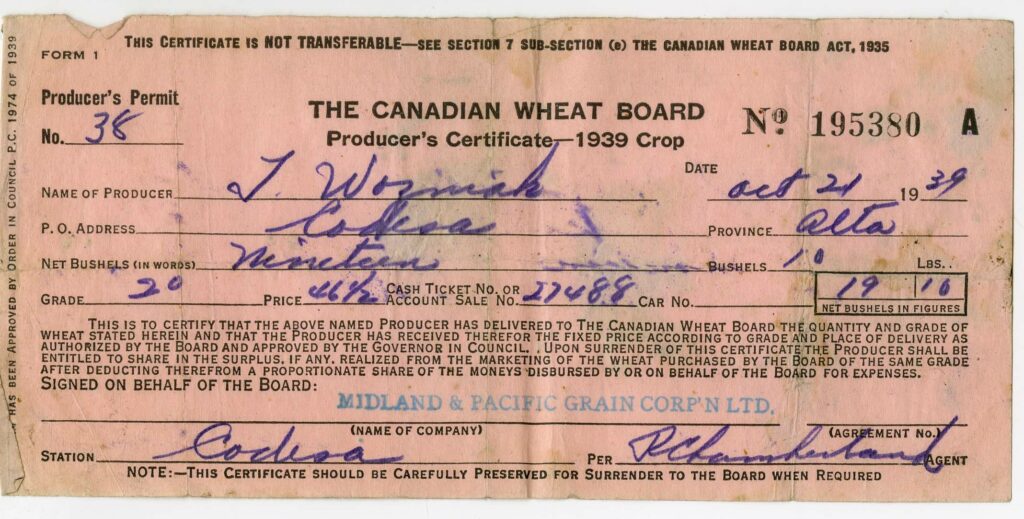 Todays “From the Vault Friday” features a wheat ticket from the Wozniak family fonds (fonds 279).

Antoni Wozniak and Maria Parachin were both born in Poland in 1903. They were married in 1922 and by 1930 had four children. With poor opportunities for the family in Poland and rumors of hostilities amongst nations, the family immigrated to Canada. They had hoped to be able to go to Toronto, where Antoni had two brothers living near Niagara Falls, but ended up on a farm in the Wanham area, arriving June 24, 1930. A cousin’s daughter also came with them.

The first few years were very difficult as they were trying to clear the trees on poor land with little money and very little outside work for cash. The children had to work alongside the parents in taking care of livestock, bringing in wood and water, gardening, picking berries and mushrooms, hunting chickens and ducks so the family had enough to eat. They attended South Slope School in Wanham, about four miles away. In 1935 the family moved to the Tansem farm, where Edward was born on December 4, 1936. Here they cleared land enough for a garden and small fields of wheat and oats. The children now went to Fox Creek School, still four miles away. Maria melted snow to feed cattle and to wash clothes for an English family for $2.00 a month. In 1936 on to their own place at Codesa, and the children could now go to Codesa School. Roman was born in 1938, the same year a forest fire destroyed their barn and the logs for their new home. A new house was finally built in 1940, and in 1942 another forest fire destroyed crops and granary.

By 1939, Antoni and Maria finally felt they could afford to bring Antoni’s mother over from Poland, but while she was getting her papers in order, war broke out. Russia occupied their part of Poland, and many of their family members perished in either the war or later exile in Siberia. Antoni’s mother and his sister, along with her husband and three children, were exiled to Siberia. Only one of the children, a girl named Christine, survived and later immigrated to London, England.

The oldest children stayed in farming. Bill joined the Canadian Army in 1942 and was sent overseas. He served in the Italian war campaign, and also in north-west Europe. After the war he returned to farm in the Belloy. Mathew worked on the family farm after he finished school until 1945, when he filed on his own homestead.

After the war, the Wozniak farm prospered and they were able to send the younger children to university. In 1964 Antoni and Maria sold the farm to Mathew and Barbara, and retired to Grande Prairie where they were involved in many aspects of the community. Antoni was president of the Peace River Polish Society for many years. In 1986 they made a trip back to Poland. Maria passed away in 1988 and Antoni in 2002.

View a selection of photos on Alberta On Record. 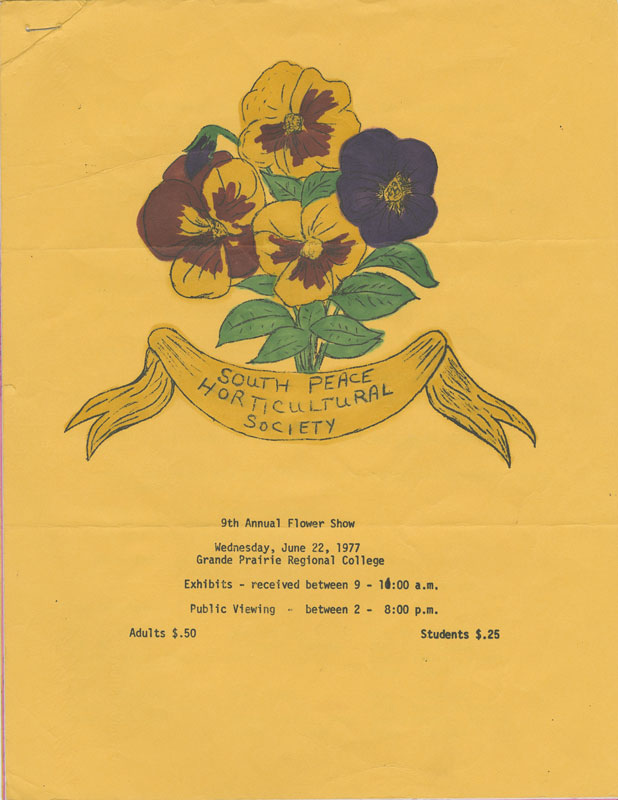 Today’s “From the Vault Friday” features a program for the South Peace Horticultural Society’s 9th Annual Flower Show in June 1977.  The South Peace Horticultural Society was formed in 1969. The society was a member of the Alberta Horticultural Association and its major projects each year were the Spring and Fall flower shows. This was later downsized to one annual flower show. In 1975, the Society adopted the pansy as its symbol, after the Grande Prairie City Council rejected it as the flower emblem of the city. The Society then had a 9 month long artwork competition, open to the public, to design a crest. The winner, Irene Pearcy, won a cash prize of $10 and a copy of the embroidered crest. 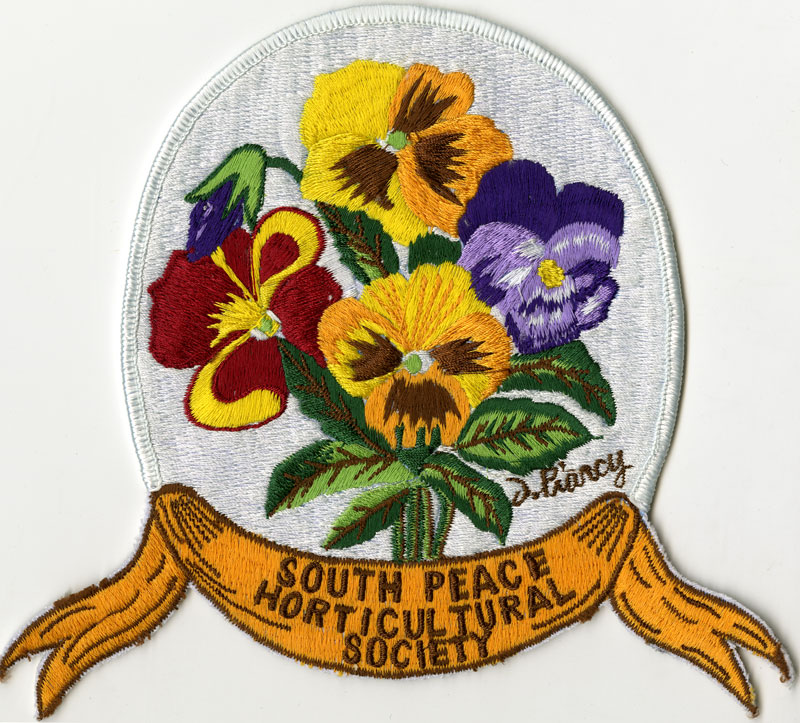 In addition to the Flower Shows, the Society worked on a variety of projects, from co-sponsored landscaping classes to a vegetable project in conjunction with John G.N. Davidson, Ph. D. from the Beaverlodge Research Station. 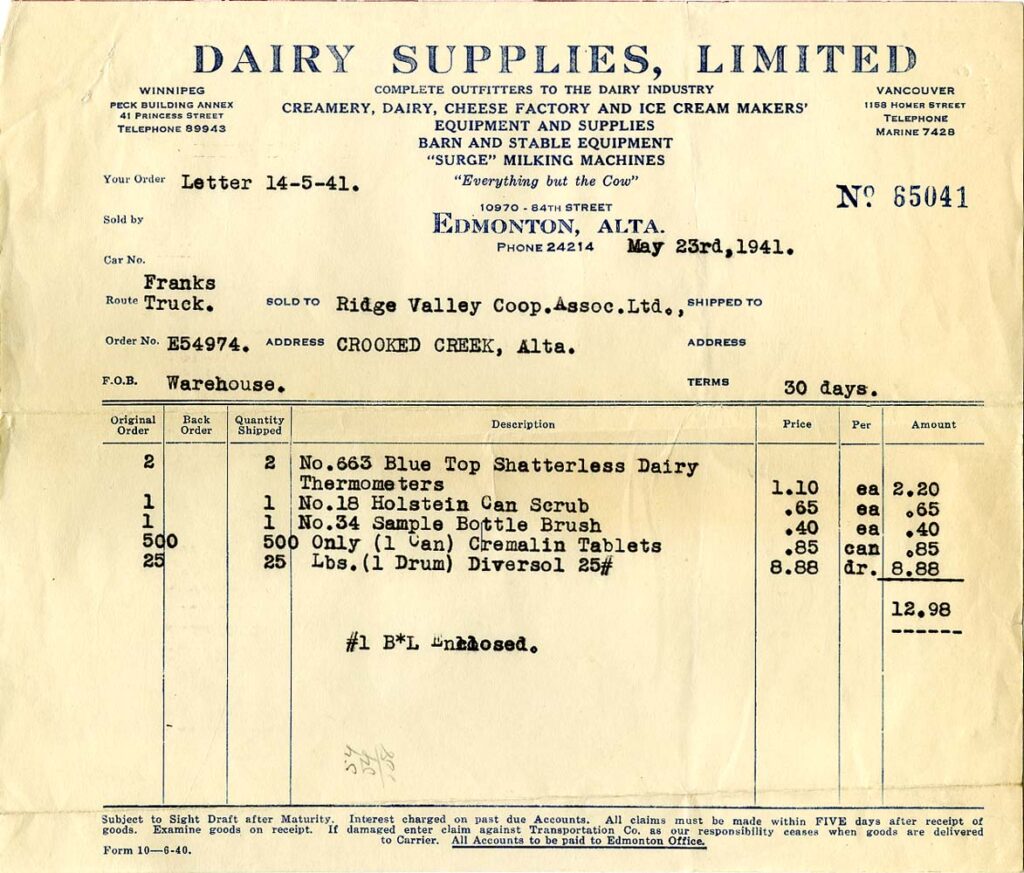 Today’s “From the Vault Friday” features an invoice for dairy supplies from the Ridge Valley Co-operative Association fonds (Fonds 161). The Ridge Valley Co-operative Association was formed on April 8, 1939 for the purpose of establishing a Cheese Factory in the Ridge Valley District of the Peace River Country. The organizers were mainly Mennonite farmers who had come to the area in the 1920s. Shares were sold to settlers in the area at a value of $25.00 each, which could be paid for in cash or by work in lieu of cash. There were 45 initial subscribers.

A frame building was built on land donated by Joseph Taylor on the south edge of SW 14-71-26-W5, beside Deep Creek which was dammed to provide water for steam. There was also an air cooled cold storage room where the cheese was stored and aged. Operating money to start the venture was borrowed from the Linden Cheese Co-op in southern Alberta, and the factory opened in 1939.

Garnet Summers was the first cheese maker. Milk was purchased from local producers who depended on ice houses to cool the milk and keep it sweet, as there was no refrigeration. For many of these farmers, it was the only regular cash income they received. The Cheddar Cheese product was made daily and sold to individuals as well as being shipped to Swift’s in Edmonton and Horne & Pitfield in Grande Prairie.

By 1941, total annual production was 44, 000lbs of cheese. In 1942, the group considered incorporation. At the time there were 27 milk shippers and they were processing 2,300 to 2,500lbs of milk per day. In 1945 there were 51 members in the association, but in 1948, the factory closed due to competition from the Northern Alberta Dairy Pool, who could offer a better price for raw milk. 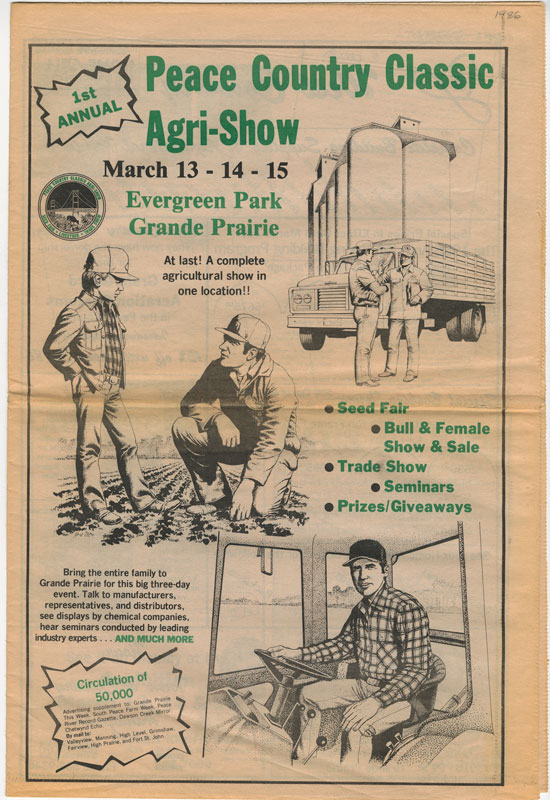