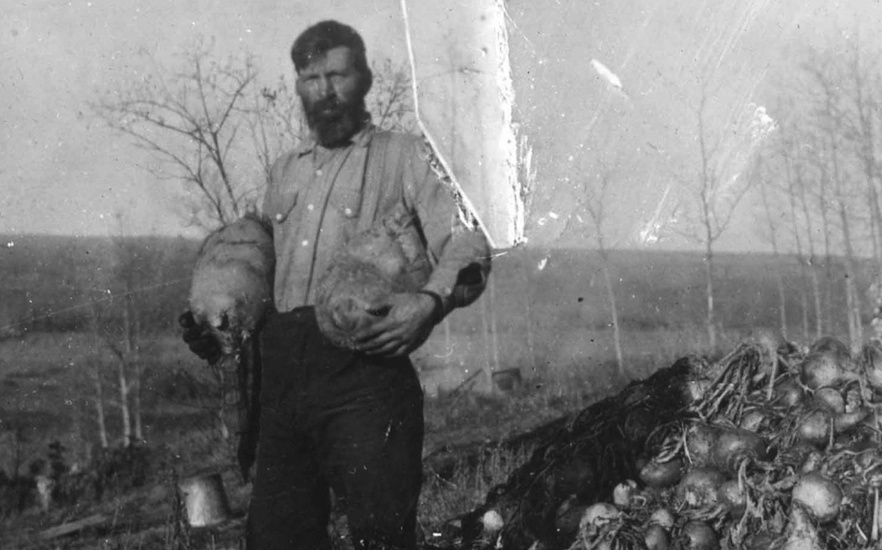 In the summer of 1907, Oliver came to Canada, seeking a new home. He travelled with two other men from Edmonton, destined for Athabasca Landing, but when his partners decided to turn back at Sawridge, he joined up with Rede Stone’s group instead. When spring came, they continued on to Beaverlodge over the Long Trail (Athabasca Trail). Oliver settled on the river at the mouth of Hay Creek (NE 10-72-10 W6th). He spent the summer and fall breaking land, planting a garden, hunting, and building a house, barn, and other structures. In December 1908, Oliver departed for Edmonton again, to join his family, whom he brought to Beaverlodge the following spring. He acquired the nickname “Rutabaga” because of the large crop of turnips he raised during his first year on the homestead.

This diary is a daily record of Oliver’s activities from June 1908 to January 1909 as he worked on his homestead, interacted with his neighbours, including the Stones, Sinclairs, Fergusons, Bredins, Hardins, Smiths, Cliffords, Germaine, Arnold, Allie Brick, Mead & Grant, members of the Beaver First Nation, and others, and travelled back to Edmonton to join his family. The last few pages of the diary list recipes, drugs, groceries, dry goods, hardware, and accounts, some of which may date from his time as a storekeeper (summer 1909 onward).

See fonds 548 on the “Finding Aids” page for a complete description of this fonds. Shown below are images of the actual diary pages, with the transcribed text alongside. Spelling, punctuation and some grammar have been corrected in the transcription.