This is part three of a six-part blog series featuring some of the individuals for whom Grande Prairie schools are named.

Alexander Forbes was born in St. Nicholas, Aberdeen, Scotland on February 17, 1860 and was the oldest of 8 children. He attended the University of Aberdeen, at which time he decided to become a foreign missionary. He originally hoped to serve in Africa, but went to Western Canada instead. He also studied at King’s College, Aberdeen, and the Free Church College. While studying at King’s College, Alexander taught singing at the Sea Bank House for fallen women, where Agnes Sorrel worked. In 1891, Agnes and Alexander became engaged.

In 1894, Alexander immigrated to Canada, landing in Nova Scotia. Although his listed destination was Winnipeg, he was soon sent to Edmonton. Agnes followed in 1895, arriving in Montreal and journeying to Edmonton, where they were married by Dr. D. G. McQueen.

Reverend and Mrs. Forbes did missionary work in Fort Saskatchewan for fifteen years. They came to the Peace country in 1909 to survey the feasibility of sending a missionary to the area and in 1910, in the absence of any other volunteers, decided to come themselves, serving as missionaries to the Peace River district and Grande Prairie in particular.

The Forbes travelled by caboose over the Long Trail to reach Grande Prairie, a winter journey that took them 73 days. In their travelling party were members of the Argonaut Company, which was the development company responsible for laying out the Grande Prairie townsite.

The Forbes first lived in shack provided by the Cliffords on their homestead at Flying Shot Lake. This building and the Forbes’ caboose also served as a pioneer hospital.

Grande Prairie’s first Presbyterian Church service was held at Mr. Smith’s shack in June 1910 with a congregation of seven. Services were also conducted at Bear Lake, Beaverlodge, and occasionally Spirit River. The first church building was erected in 1911 on the eastern banks of Bear Creek. There were Presbyterian churches later built at Spring Creek, Glen Leslie, and Bezanson. Services were also held at Clairmont, Sexsmith, Kleskun Lake, and occasionally Sturgeon Lake.

In the fall of 1910, Alexander filed on a homestead bordered by today’s 100 Avenue, 100 Street, 108 Avenue, and 96 Street. The first building on the homestead was the pioneer hospital, built in 1911. The Forbes later built an adjoining home, Montrose House. This building is still on its original site on what is now 96 Street.

In October of 1911, Alexander was elected trustee of the Grande Prairie School Board. Montrose School was later located on their land and named for Agnes’ home in Scotland. A new, larger hospital facility was constructed in 1914 to replace the Pioneer Hospital at the Forbes’ house. The Kathryn Prittie Hospital was located on the Forbes homestead near the railroad tracks.

Agnes died in her sleep in August 1917 and is buried in the Grande Prairie Cemetery. Alexander carried on the work of the church after her death.  He remarried in 1921 to Miss Christine Smith, a nurse.

In 1925, the issue of church union between the Presbyterian, Methodist, and Congregational denominations was raised in the Grande Prairie congregation, as it was across the country. A meeting was called to decide whether or not the congregation would remain Presbyterian or become United. The vote for union passed, creating St. Paul’s United Church. Reverend Forbes accepted a call to the Presbyterian church in Teeswater and Belmore, Ontario, where he served for the next seven years. His final church was in Sutton and Mount Pleasant. He retired in 1936 and lived in Toronto. After death of Christine in 1944, he moved to Paris, Ontario, where he died in 1945.

You may view the Alexander and Agnes Forbes Finding Aid here. 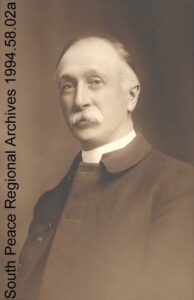 This is part two of a six-part blog series featuring some of the individuals for whom Grande Prairie schools are named.

Maud(e) Westcott was born in Kent County, Ontario on April 8, 1877. She graduated from Ridgetown High School, trained as a teacher at London Normal School and taught in Leamington, Ontario for five years.

In 1903, Maude married Harry Burton Clifford, who at the time, was involved in the Western Ontario oil industry. The couple lived in Detroit, Michigan until 1905 when Harry made a trip to the Grande Prairie area via canoe and pack train, lured by the rich potential of the area. Maude joined him for his second trip in January 1906, travelling by train to Strathcona (Edmonton) and overland by caboose for 31 days via the Long Trail, becoming the first white woman to settle in the Grande Prairie area.

On arrival, the Cliffords rented log buildings from the local Metis at Flying Shot Lake until their own house and outbuildings on the west side of the Lake were completed in May of 1906. The Cliffords homesteaded, ran a cattle herd, and operated a trading post there. Maude also created an herbarium using local flora and wrote to the Central Experimental Farm in Ottawa, receiving informational bulletins and seeds. The Cliffords’ three children, Hilda, Eleanor, and Harry were all born in the Flying Shot district.

The Cliffords’ homestead became the site of many community activities. In 1906, Maude was brought a patient to take care of, making her the area’s first “nurse”. Thereafter, the house and outbuildings became the site of the first hospital, first Protestant (Anglican) church service, first court, and a RNWMP post. Maude also gave classes to the Cree, Beaver, Metis, and white children of the area, earning her the title of first teacher in the Grande Prairie area. The Clifford homestead also served as the temporary home of Presbyterian missionaries Alexander and Agnes Forbes and headquarters of early surveyor Walter McFarlane.

By 1916, Harry’s health was failing, the trading post was closed, and Maude returned to her old career of teaching. She was employed by the Wapiti School District No. 2802 and the family moved into two rooms at “Lacombe” Johnson’s house. A couple of years later, they moved into Grande Prairie and Maude taught the primary class and music at Grande Prairie’s Montrose School from 1918 to 1926. Her interest in music is also evident from her membership in Grande Prairie’s first Community Choir and as a leading cast member in “Esther”, the first cantata to be performed.

Harry Clifford died in Grande Prairie in 1925 after several years of illness. The following year, Maude and her children moved to Victoria, BC, where she continued to teach. After spending some time in Coleman, Alberta, she returned to Victoria and she concluded her teaching career there in the early 1940s. In 1935 she was honoured with a silver Jubilee Medal.

This is part one of a six-part blog series featuring some of the individuals for whom Grande Prairie schools are named. 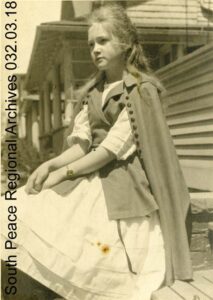