Cyril was born August 6, 1882 on St. Vincent’s Island in the West Indies. His father was an Anglican minister and his mother West Indian. He attended Oxford University and was said to have been a classmate of Winston Churchill. About 1910 he immigrated to Canada and when war broke out he enlisted in the Canadian Expeditionary Force. He spoke several languages and served as an interpreter in France during World War I. Cyril was awarded the Military Medal on August 16, 1917 for bravery in the field, as well as the Distinguished Conduct Medal on February 21, 1919. He received a gunshot wound to his right arm in August of 1918.

After the war, Cyril took a Soldier’s Settlement Grant in the Teepee Creek area (SE 31-73-3-W6). He soon discovered that farming made his asthma much worse and began concentrating on growing vegetables and flowers instead. As a black, highly educated, lifelong bachelor, and non-farmer, he was not the norm at Teepee Creek.

Cyril soon began specializing in peonies, about which he was passionate. The conservative estimate is that Mr. Clarke tested about 2000 cultivars over his thirty years of collecting. He was a regular contributor to the American Peony Society bulletin and a leading authority on peony hybrids.

As he aged, Cyril began to lose his sight and his gardening friends persuaded him to move closer to Grande Prairie. They packed up his peonies and sent them to various homes. Large collections went to the Beaverlodge Research Station and the Devonian Botanic Garden near Edmonton and his records and 921 specimens were donated to the Department of Horticulture at the University of Alberta. The university grounds are still beautified with Clarke’s peonies.

Cyril himself moved to Dr. Gurth O’Brien’s land, where he had a garden spot of good, well-cultivated soil beside O’Brien Lake. Mr. Clarke passed away at his home on December 20, 1952, at the age of 70 years. 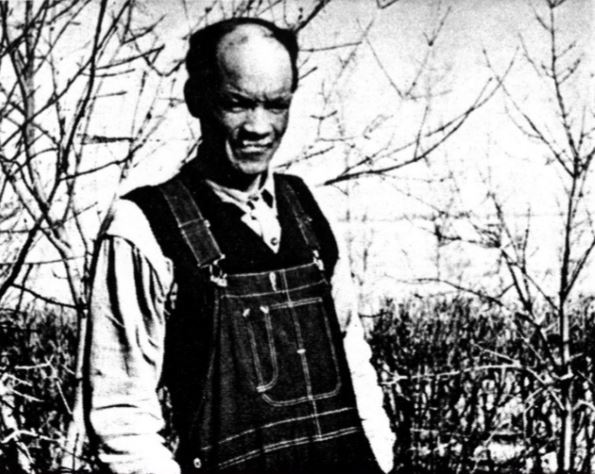