This is part five of a six-part blog series featuring some of the individuals for whom Grande Prairie schools are named. 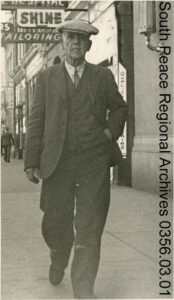