There is no lack of exciting stories and extraordinary pieces of history to be found at the South Peace Regional Archives. Nestled among the Sports, Recreation, and Leisure reference files are news clippings detailing the unique story of a group of 10 local pigeon enthusiasts who joined forces in 1987 to create a club fit for sports fans and bird lovers alike: the Grande Prairie Pigeon Racing Club. Pigeon racing is a sport in which trained racing pigeons are released by their owners at a specific location, often ranging from 150 to 950 kilometers away. The pigeons are then monitored using a clocking machine that is placed on their legs and measures the distance travelled per second as they make the return flight home. The bird that arrives home the fastest is declared the winner of that day’s race, and often earns a sum of prize money for their owners. The Grande Prairie Pigeon Racing Club’s 1987 season ran from May to late August, with races taking place every weekend.

Bob Lange, a Clairmont resident and one of the Grande Prairie Pigeon Racing Club’s founders, had a passion for pigeon racing long before the club was established. In the 3 May 1984 edition of the Daily Herald-Tribune, Lange described his 50-year-long history of training and breeding pigeons for racing. According to the article, Lange owned about 500 pigeons from locations such as France, Belgium, England, Ireland, and the United States: some of which had cost him as much as $1,200. Lange detailed the long process of training a racing pigeon, which he recommends begins when the pigeon is about three months old. The initial training starts by taking the pigeon about 1.5 to 8 kilometers away, and having it return home from each direction. The distance is gradually increased until eventually the pigeon can complete a 480 kilometer trip. At the time the article was published, Lange was breeding pigeons using “proven birds who have flown at least 1,600 kilometers” for other clubs and individuals, however he expressed his hopes for setting up a racing club in the Grande Prairie area (DHT, 3 May 1984). Lange later accomplished this dream with the establishment of the Grande Prairie Pigeon Racing Club.

Members of the Grande Prairie Pigeon Racing Club saw their fair share of races gone wrong. Herald-Tribune staff member Stephen Fletcher once observed that “when your racetrack is in the sky, there’s no telling what an ill-timed air current can do,” leaving lots of unpredictable variables in each race (DHT, c 1990). Between the pigeons losing their sense of direction, taking a break in comfy-looking barns along the route, or the ever constant threat of prey-seeking marauders, there are plenty of opportunities for racing events to go awry. Mike Wright, a founder and former president of the club, knew this all too well. Wright shared various stories of mishaps in his pigeon racing career with the Daily Herald-Tribune. One of these involved a hawk with a very expensive palate. Just weeks after purchasing a very speedy, champion racer for $10,000, Wright learned the hard way that high prices don’t guarantee results. His new prized-pigeon became a lunchtime meal for one of the Peace Region’s many birds of prey. The truly unpredictable nature of pigeon racing means that even with proven winners and well trained racers, there are rarely any certainties when it comes to the sport.

These clippings show years of passion and dedication towards breeding, training, and racing pigeons. Through these records, it is apparent that the Grande Prairie Pigeon Racing Club gave community members in Grande Prairie and the surrounding areas a unique opportunity: to learn and appreciate the many challenges and triumphs that come along with the excitement of pigeon racing. 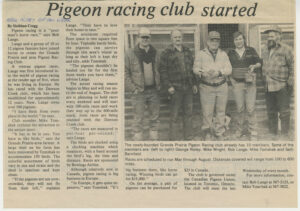 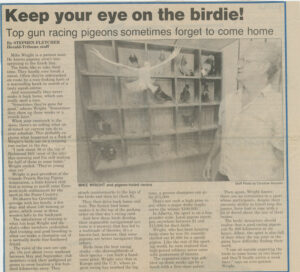