“As I’ve told you before, you’ve always sort of been my dream girl.  From the first night I met you I found there was something about you that was irresistible.  If I were to call you up in about six months time, do you suppose you’d go for a walk with me through Stanley Park?”

These were Richard “Dick” Lewis’s words to Ursula Walker when he wrote to her from Holland on May 10, 1945, shortly after the Allied victory in Europe.

Dick and Ursula had met in the summer of 1941 at a dance in Vancouver, where Dick was stationed with the Royal Canadian Air Force.  When Ursula went to work in Penticton the following summer, the two began a lively correspondence.  It did not take Dick long to realize that he had met the girl of his dreams, and in his letters he made no secret of the fact that he was smitten.

“You know, I do think an awful lot of you, and even though I have known you a comparatively short time, feel I do know you well.  After this war is over, I would like to talk you into a life-time job.  Is there any chance?  Believe me, you are the only one I have ever talked thus to.”

Ursula, only seventeen at the time (Dick was twenty-six), was less certain, and turned down the proposal.  They continued to correspond, however, as Dick went overseas to serve with the RCAF.

Three years later, after the war ended, Dick returned to Canada.  After not having seen each other for so long, neither was entirely sure how they felt about the other.  As Dick wrote to Ursula on August 7, 1945:

“You say you don’t know exactly how you feel towards me.  I suppose to be quite fair, it is difficult to know.  I’m not exactly sure myself but I think I know and I do want the chance to find out for both of us.”

On October 22, 1945, Dick arrived on Quadra Island, British Columbia, where Ursula was spending two months of rest. As a nursing student, she had been stationed on the tuberculosis ward and had contracted an infection.  They spent two weeks together, taking the opportunity to get acquainted once again after the years apart.

Evidently, Dick found that Ursula was still his “dream girl” and the woman with whom he wanted to share his life, for he proposed the very day of his arrival. Ursula needed more time to be sure of her own heart, but before Dick left on November 5, she said yes.

I know it is late but I just can’t go to bed without telling the most wonderful girl in the world how much I love her… Thank you so much, Ursula darling, for saying “yes” before I left you; it means more to me than anything else in the world.  I am missing you awfully, darling, but there is such a feeling of comfort to know that you are there and that you love me…

Twenty-eight of the letters Ursula and Dick exchanged during their five month engagement are housed at the archives.  These letters, as well those written during the war years, have been digitized and transcribed.

This article was originally featured in the March 2018 issue of Telling Our Stories. 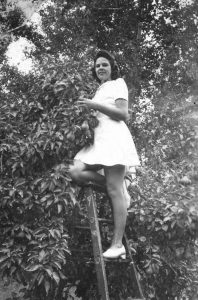 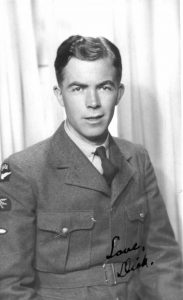 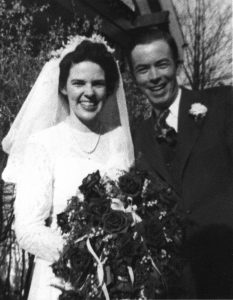