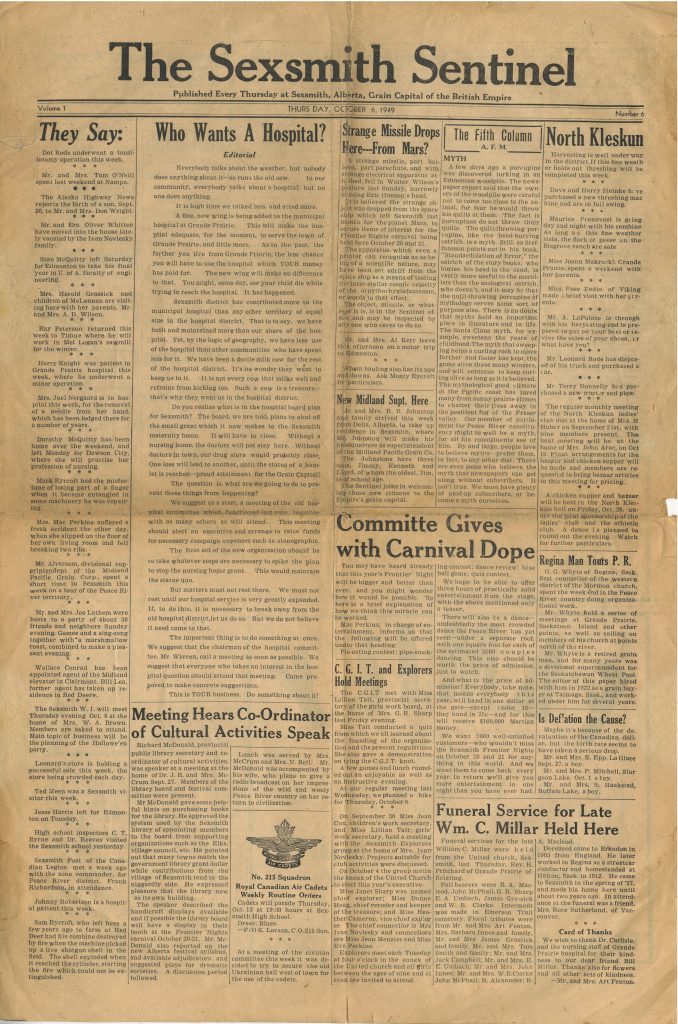 Todays “From the Vault Friday” features newspaper from The Sexsmith Sentinel fonds (Fonds 180). The Sexsmith Sentinel was an independent newspaper printed from 1949 to 1954 published by A.F. Menzies and Son at Sexsmith, Alberta. It was launched in the Fall of 1949 by Art Menzies who had come to Sexsmith from Saskatchewan in 1938 to run the McDonald Grain Elevator. In 1951, the Spirit River Signal was also started and printed in the Sexsmith Shop. Art’s son Malcolm was a partner in the business, and Art’s daughter Helen was the first editor. The firm continued to operate in Sexsmith until the fall of 1954, when publication of the Sentinel was discontinued. As well as operating The Sentinel, Art Menzies served on the Sexsmith School Board, Town Council and as the Mayor of Sexsmith.

In 1954 the plant was moved to Spirit River and the company’s activities were centralized there under the management of son Malcolm. Art Menzies later established the High Prairie Progress, which they operated until 1959, when both the Signal and the Progress were sold to an Edmonton publisher and the Menzies moved their printing operations to Grande Prairie.

The papers deal mainly with local news from Sexsmith, Valhalla, Wembley, La Glace, Rycroft, Clairmont, and the outlying districts. The Sentinel also included a section titled “They Say”; a gossip section that reports the comings and goings, hospitalizations, and various mishaps of the area, such as a lady going to the hospital to have a needle removed from her hand that had been lodged there for many years. Another notable excerpt is “Sam Rycroft. who left here a few years ago to farm at Red Deer had his combine destroyed by fire when the machine picked up a live shotgun shell in the field. The shell exploded when it reached the cylinder, starting the fire which could not be extinguished.”