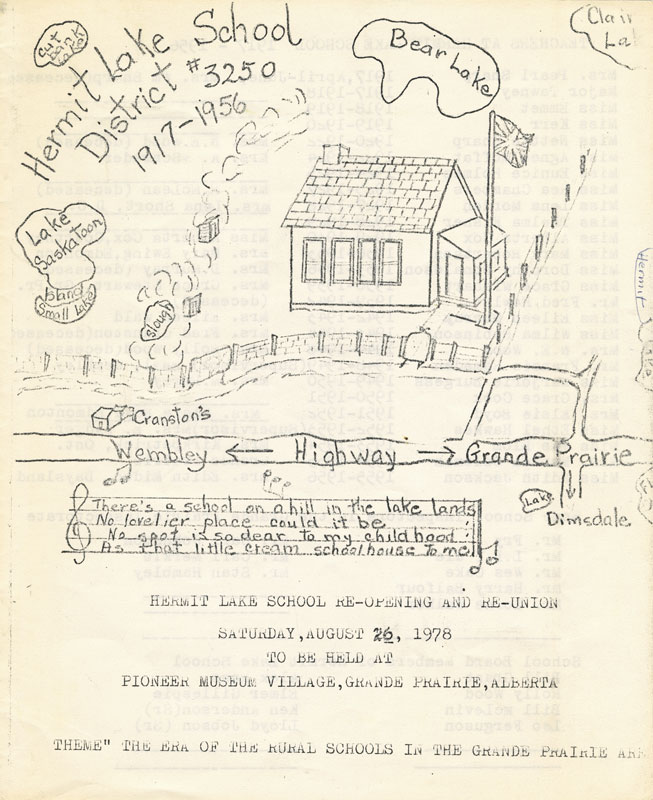 Todays “From the Vault Friday” features a poster from the Hermit Lake School History fonds (Fonds 440) for a class reunion in 1978. Hermit Lake School District was formed in 1915/16, although classes had been held since 1913. An elected Board of Trustees began planning to build a school. Two acres of land in the south-east corner of Bill Grant’s farm were purchased at $.25 an acre. The school was built by William Sharp and finished in time for classes to start in March, 1917, with Mrs. Molly Sharp, Bill’s wife, as the first teacher. 1928 the school was moved to a new location on the SE-5-72-7-W6 purchased from Fred Evans. In June, 1956, Hermit Lake School was closed and students transferred to Wembley, Lake Saskatoon, or Grande Prairie County School. The building was used as a community hall by the Hermit Lake Community Association until 1976, when it was moved to the Grande Prairie Museum Heritage Village.

Photos featuring the Hermit Lake School on Alberta On Record