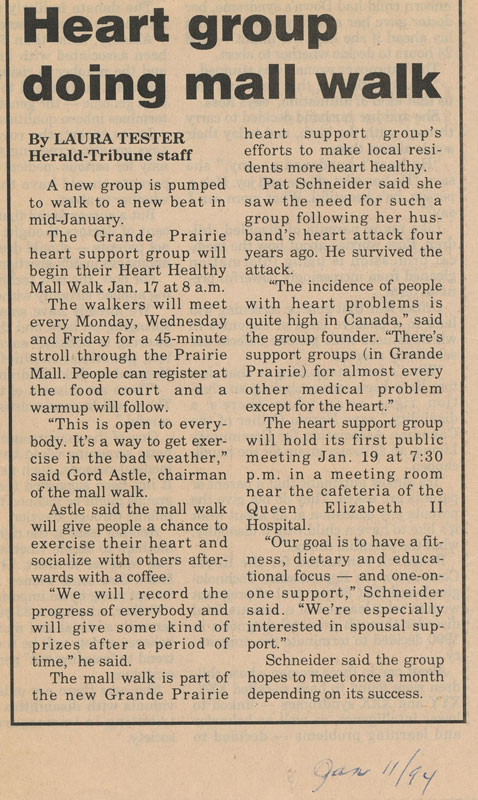 Todays “From the Vault Friday” features a newspaper clipping from Heart Healthy Support Group fonds (Fonds 283). In 1990, after her husband had suffered a heart attack, Pat Schneider sensed the need for the formation of a group to provide support and rehabilitation information to heart patients and their families in Grande Prairie. An initial steering committee met on Dec 23, 1993, and organized the first meeting of what became the Heart Healthy Support Group. January 19, 1994, saw thirteen people attend that first meeting in a room provided by the QEII Hospital. The vision of the group was to provide spousal support for heart patients, to provide dietary and medical information through handouts and speakers, and to encourage exercise through walking. They formed a group known as the “Mall Walkers” who met in the Prairie Mall three mornings a week to walk the corridors of the Mall for up to an hour. An initial 24 people registered for the walking program, but by their spring wind-up in 1996, 135 people had accumulated 6500 miles in that season’s six months of walking. The group disbanded after 1997 but by the example they set, many people still “walk the mall” early in the morning.