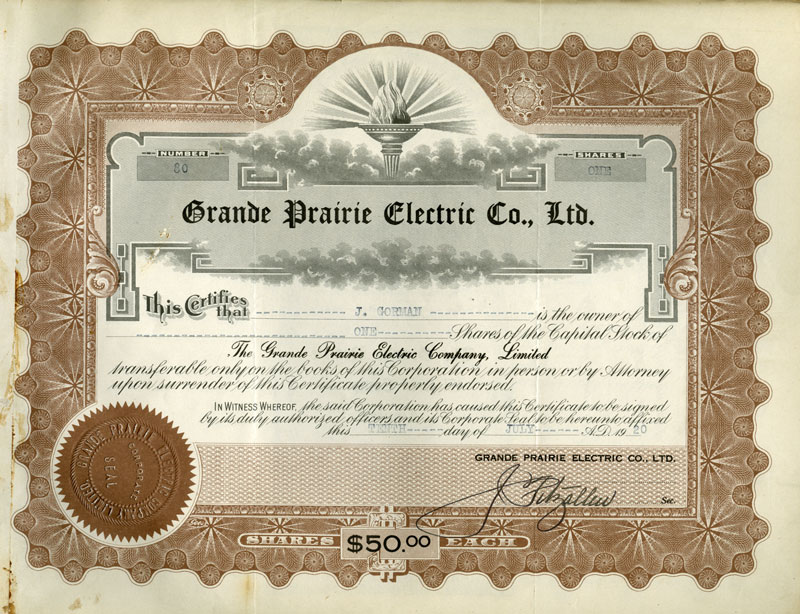 The first electrical power in Grande Prairie was produced by the Grande Prairie Flour Mill in 1915.  This source was very limited and by 1918, there was high demand for better services. Because the village did not have the finances to install an Electrical Plant, 93 residents signed a Memorandum of Association, and formed The Grande Prairie Electric Company on April 16th, 1918.  After negotiating an agreement with Village Council and the Board of Public Utility Commissioners of the Province, a ten year franchise was authorized on October 1, 1919. The Company then installed the Electric Plant and service started on December 15th, 1919.  The power plant operated from sundown to midnight and from 5:00 a.m. to sunrise, and the rate was 25 cents per kilowatt hour ($3.37/kWh in 2020 money, electricity now costs ~6.29¢/kWh). The idea was to finance the capital payments by selling additional shares, but by June 1920, they had an $8,800.00 deficit.  They asked the Town of Grande Prairie to take over the plant over as a Municipal Utility rather than let it be seized by the Manufacturer who held a lien on the equipment. The town took the company over as of January 1, 1921. After all debts were paid, the shareholders received 32 cents on each dollar they had invested. After the Town of Grande Prairie took over the company, they continued to sell shares in the company.  A recession in the early 1920s made it difficult to collect all the accounts owed, or finance it with debentures, but by the fall of 1923, the Town was able to pay out the debt incurred by the company and have clear title to the Electric Plant.