Philias was born on June 17, 1888 in Wotton, Wolfe County, Quebec. It is unknown when he first came out west.  In 1913, there was an explosion in the mine where Philias was working in Fernie, British Columbia. His skull was fractured and he suffered from headaches as a result; not surprisingly, the headaches worsened after joining the army. Philias was wounded at Vimy Ridge in January of 1917; he fractured the middle finger of his right hand and there was shrapnel in his right elbow and left leg. He was also struck in the head and was unconscious for four hours after being wounded and had two fits on the way to England. Philias was sent to a convalescent home in Edmonton, and discharged on November 30, 1917. Numerous disabilities were listed on his discharge paper: loss of function in his right hand, dizziness, pains in his head, poor memory, fits, nervousness, and weakness in his left leg. In the board’s opinion, Philias was mentally deficient. After discharge, in 1918, he settled in the Elmworth area (3-70-11-W6) with his Irish wife. Philias died on February 26, 1962 at the Shaughnessy Hospital, Vancouver. 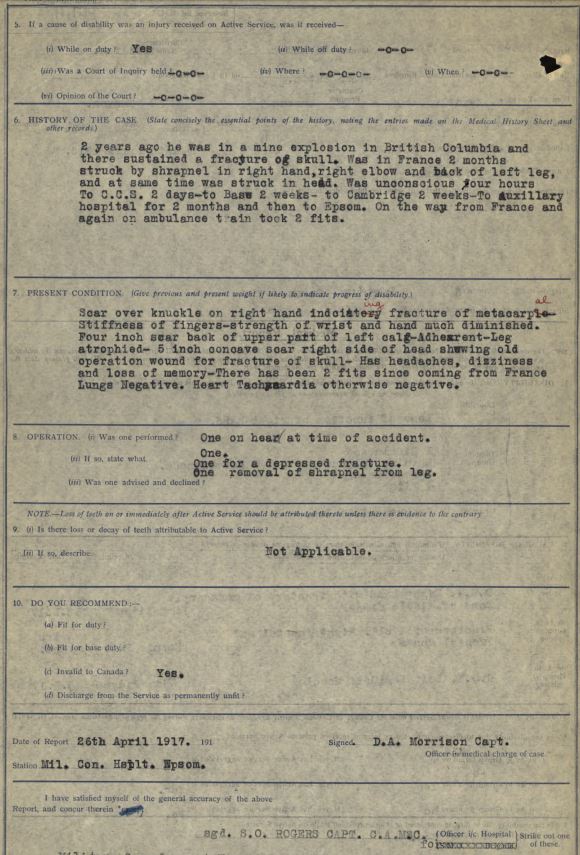