Above: Card shared between Margaret and Eddie Schadeck, 1948.  SPRA 131 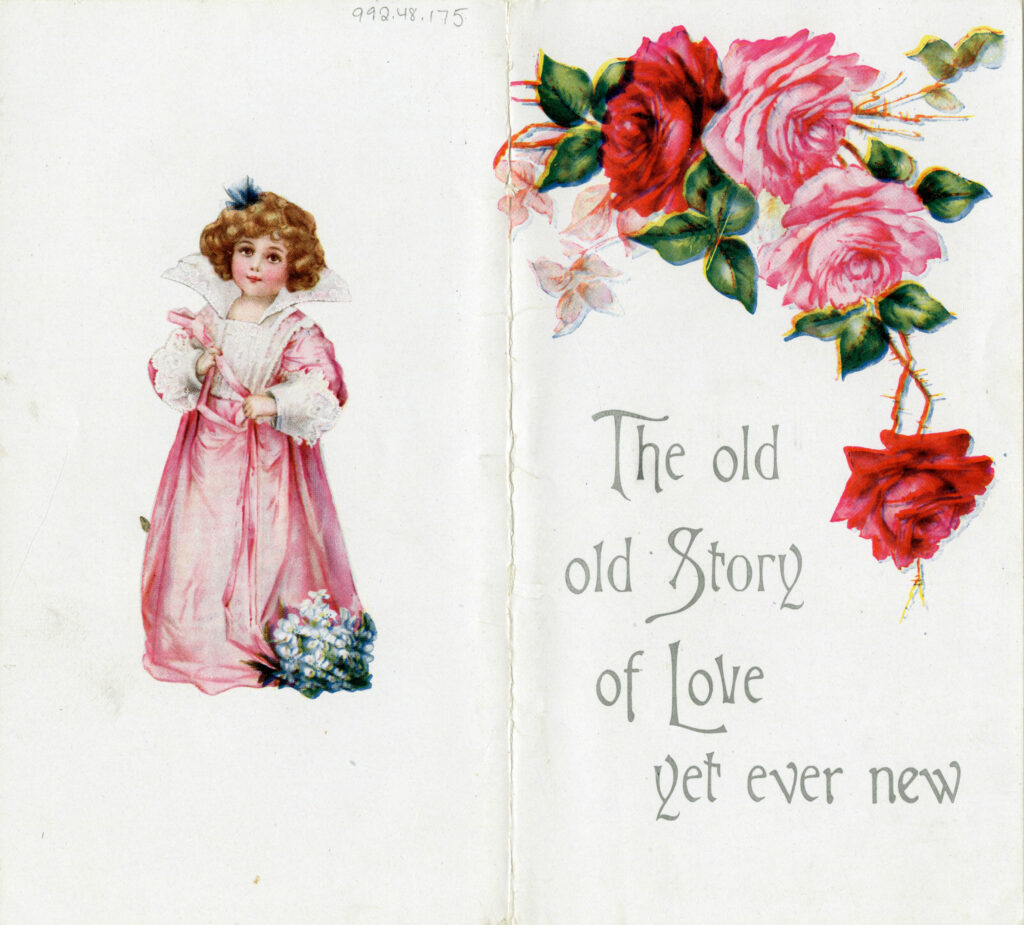 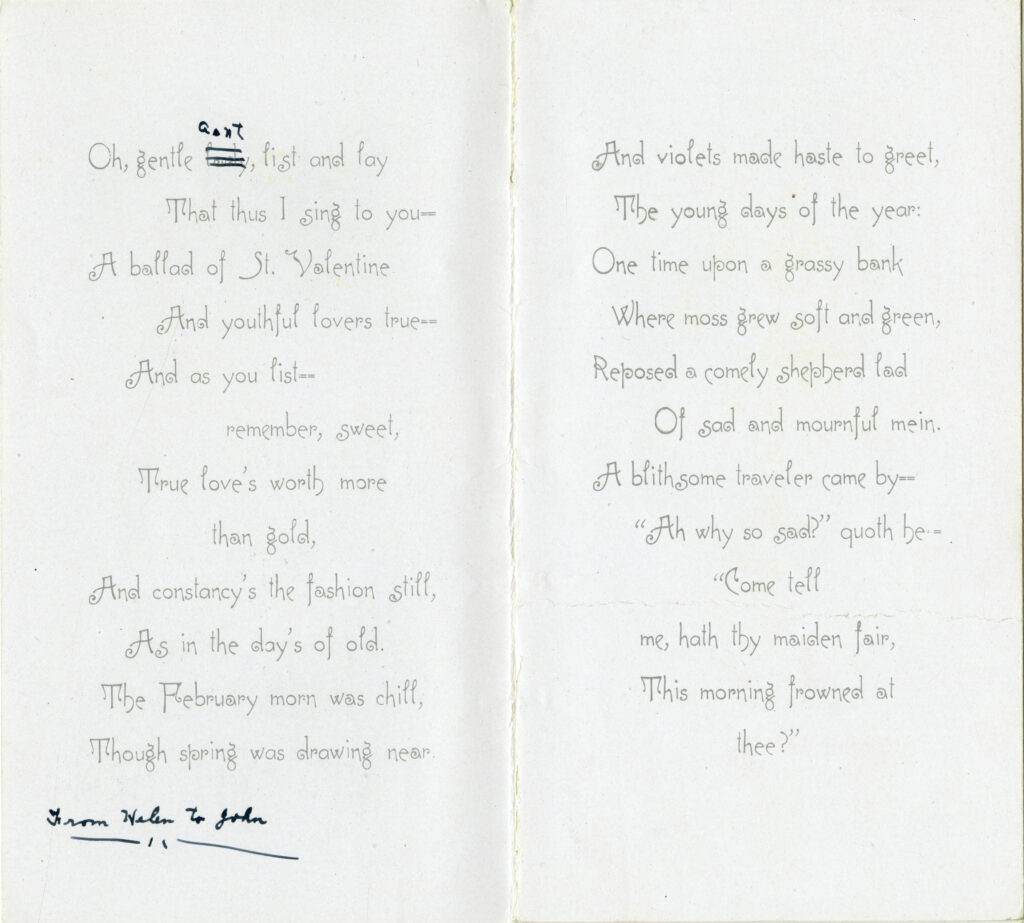 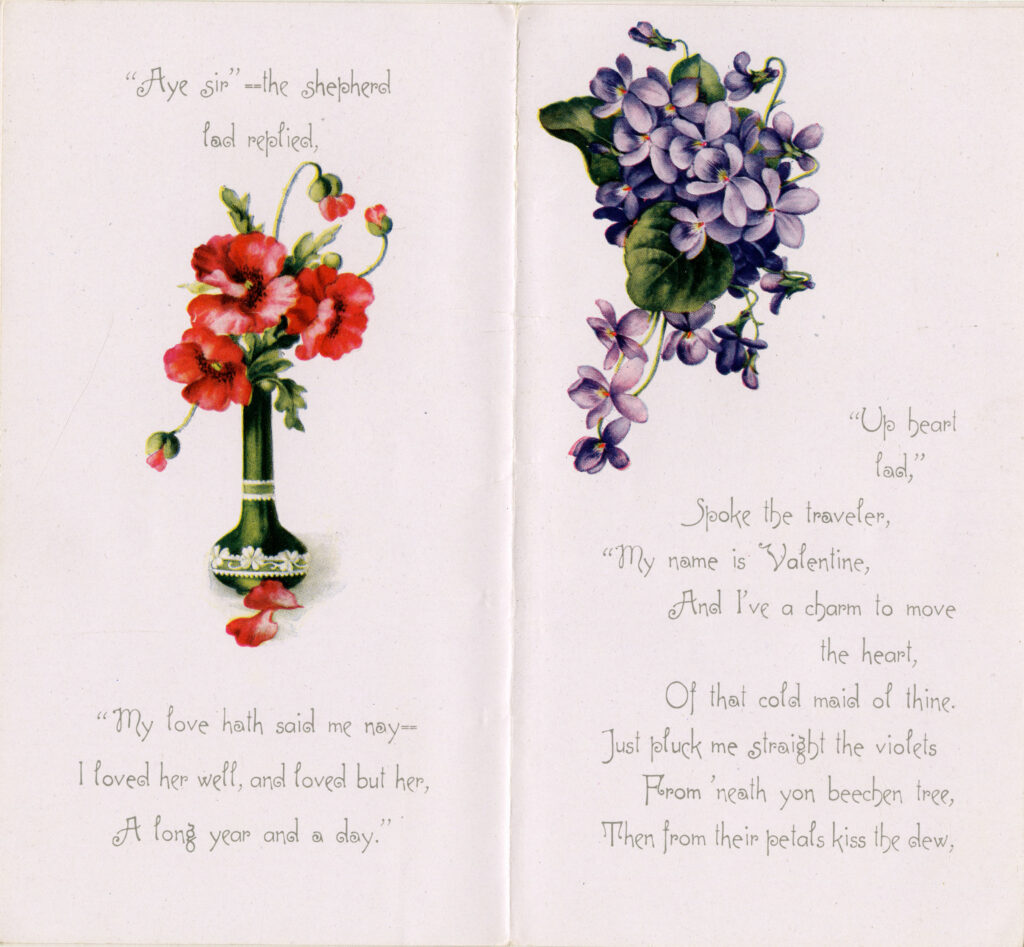 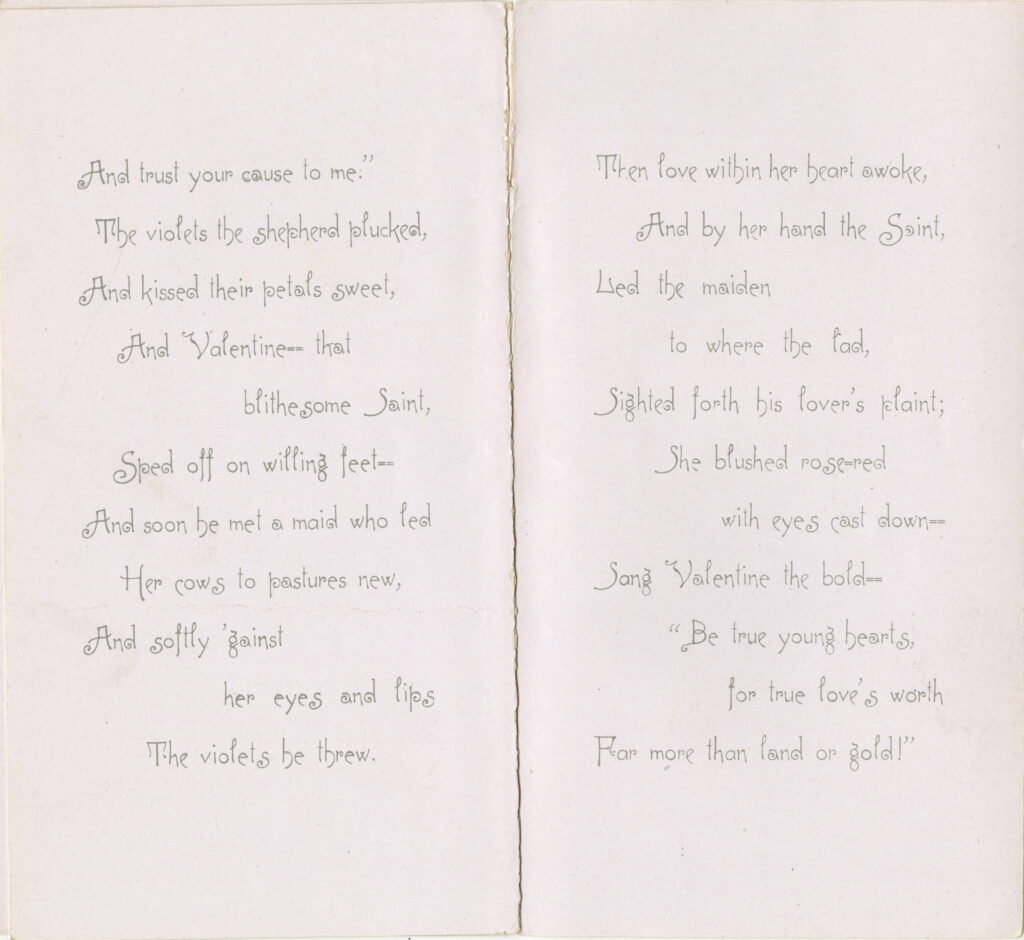 Valentine’s Day can be traced back to ancient Rome when Lupercalia, a fertility rite, was celebrated between February 13 and 15. Later, after the martyrdom of two Christian saints – Valentine of Terni around AD 197 and Valentine of Rome around AD 496 – the Catholic church Christianized the holiday by claiming 14 February as St. Valentine’s Day.

You will not be surprised to learn it was the French who made it into a celebrated annual feast day for lovers with lavish banquets and singing and dancing during the 15th century. Nor should you be surprised to learn that the oldest surviving Valentine committed to paper was written by a French man. While imprisoned in the Tower of London following the 1415 battle of Agincourt, the Duke of Orleans wrote to his wife: “Je suis desja d’amour tanné/Ma tres doulce Valentinée,” which means, “I am already sick of love/my very gentle Valentine.” The letter must not have made it to his wife as it is held at the British Library, which also holds the oldest surviving English Valentine. Written in 1477, it was sent by Margery Brews to her “right well-beloved Valentine,” fiancé John Paston.

Hand-made Valentine’s cards became popular in the 18th century. During this period, factory made cards also began to be produced, although they did not become popular until the 19th century. Possibly the oldest surviving printed Valentine’s card is the 1797 card at York Castle Museum, England. It was sent by Catherine Mossday to Mr. Brown of London and read: “Since on this ever Happy day,/All Nature’s full of Love and Play./Yet harmless still if my design,/‘Tis but to be your Valentine.”

To continue in the tradition of celebrating Love on St. Valentine’s Day, here are a few choice Valentine’s Day cards from our collection. Their heartfelt expressions, though written in the past, still ring true for friends and lovers today.

Below: Cards shared between Margaret and Eddie Schadeck before 1949. These two cards have movable parts.  SPRA 131. 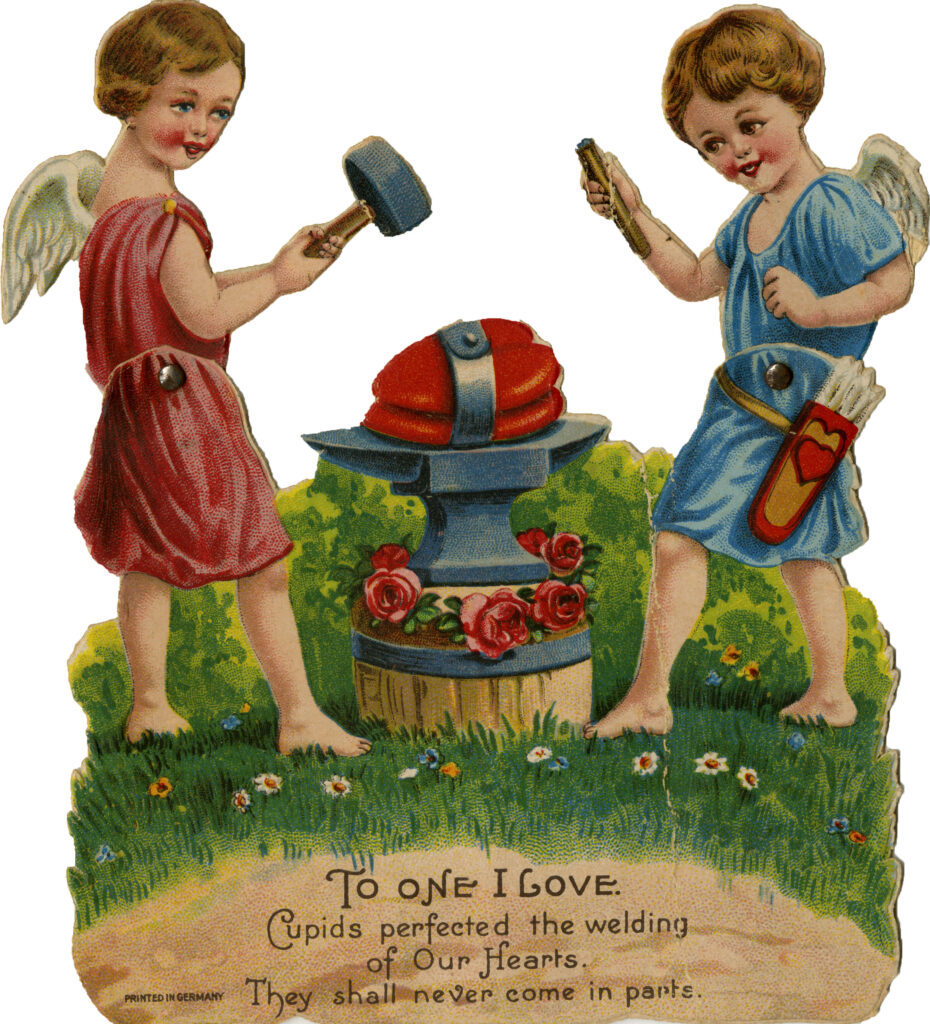 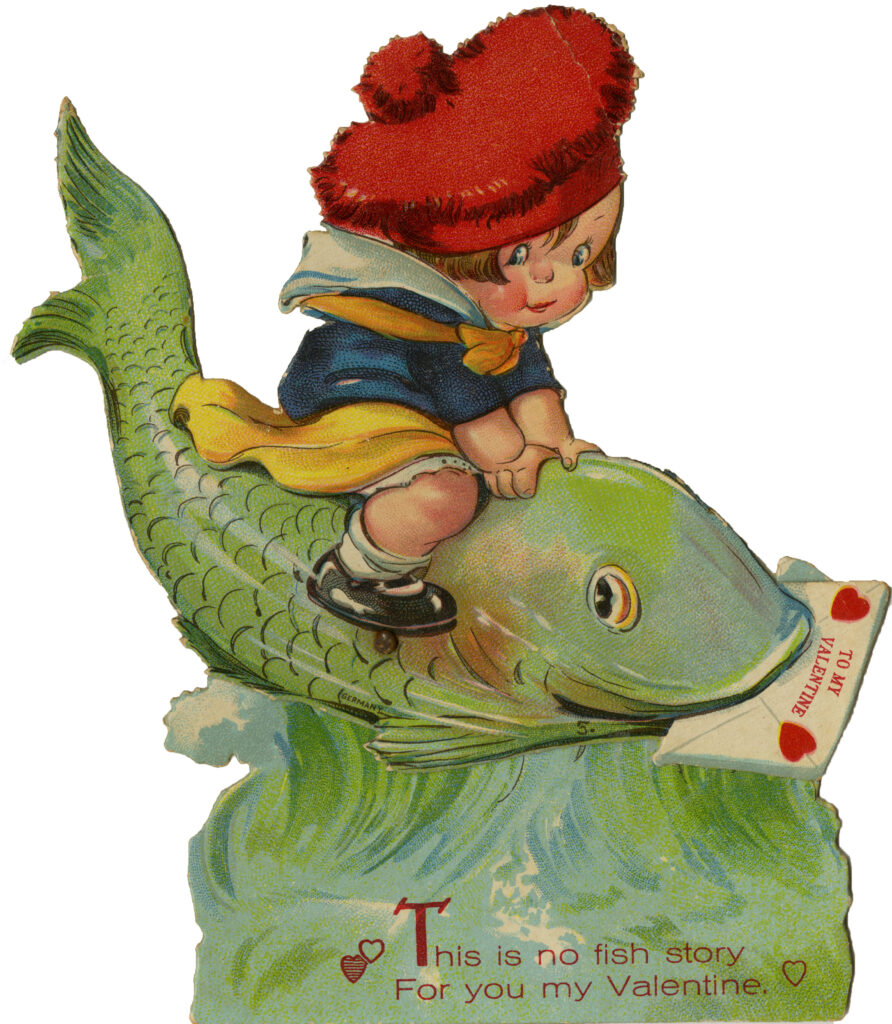 Below: Valentine shared between Muriel and Clem Collins, n.d. SPRA 476. 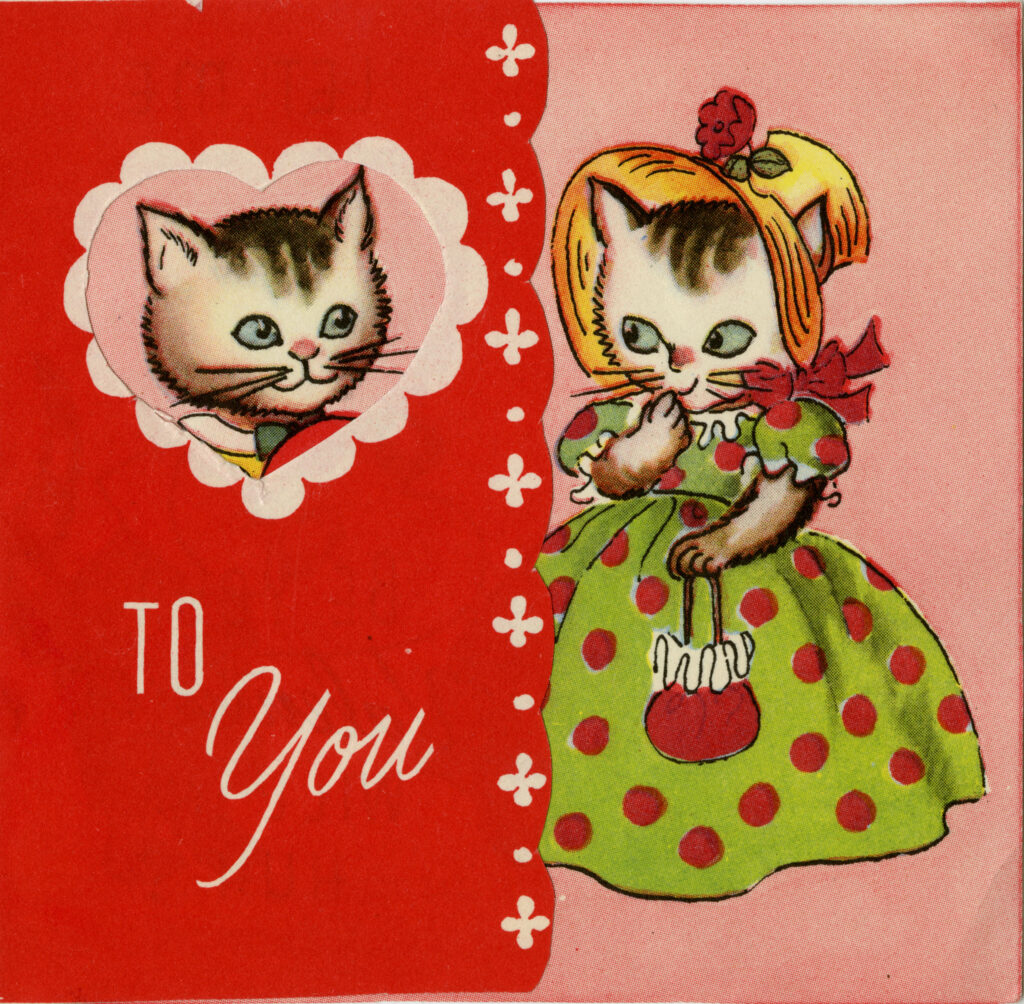 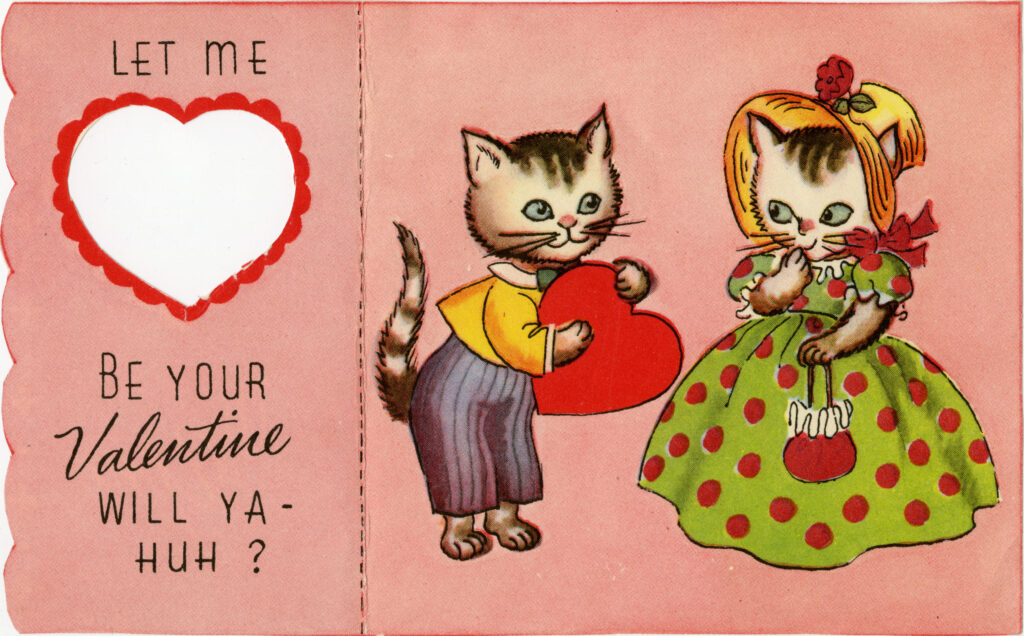