The Archives recently received a research inquiry seeking information on a wooden token produced by Weyerhaeuser. The researcher had previously received two possible explanations for the origin of the token and was seeking evidence that would substantiate either claim. One source indicated that the token was produced by Weyerhauser during the 1995 Canada Winter Games in Grande Prairie and redeemed in its sponsored tent on site for a hot chocolate. However, another source indicated that the token was issued in Yellowknife. NWT for a “Canada Games.” With permission of the researcher, Archives staff turned to our Facebook followers for more information.

We shared an image of the wood token on our Facebook page to tremendous success. Over 7700 people saw, commented, or liked the post. Many of our Facebook followers joined in the mystery by tagging their friends or speculating on the token’s possible use. Perhaps it was used as a gambling token at a staff holiday party? Maybe it was used as a drink token at a community barbecue? In less than a day, Weyerhaeuser employee Noreen Schultz had confirmed the token’s origin: she had ordered the tokens from local promotional company, GP Promotional. They were distributed in exchange for hot chocolate during the 1995 Canada Winter Games. Another former Weyerhaeuser employee, Linda Everton Pearson, shared a photograph of the commemorative mug that the hot chocolate came in. The mystery was solved! 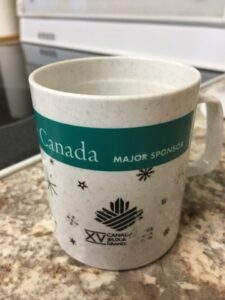