If you’ve received your copy of Telling Our Stories, you will already have had a glimpse inside the “Western Birds” book written and illustrated by eleven-year-old Cecile Sandboe Angen in 1931. Cecile’s family contributed a digitized copy of this book, as well as a selection of family photographs, to be shared in our magazine. The following biography was written by Cecile’s daughter, Gail Risvold.

It is appropriate to write about my mom in this edition of your magazine because she was always interested in birds.  She put bird feeders out and she took great pleasure in observing which birds would come to visit.  One time when she was visiting us in Hinton my husband Ross and Mom sat on our patio and watched the different birds that came for a drink in our backyard pond.  I decided it was time to clean the pond and put in fresh water but I also added an ingredient that got rid of algae.  The instructions stated that it was safe to use and it would not cause harm to any animals including birds.  BUT the birds did not agree!  They did not come back for a drink and I felt bad because I deprived Mom of the pleasure they had experienced. They quickly drained the water without me knowing and the birds returned.

Mom started school in Taco, Saskatchewan.  Then the family moved back to LaGlace and she attended Buffalo Lake School, a one-room schoolhouse.  Mom and her siblings would walk 3.5 miles each way and in winter they traveled to school with a horse and sleigh.

Mom was very responsible and obedient.  Ted Heimdal sat behind Mom in school.  He would bug and aggravate Mom on a regular basis.  One day Ted kept poking Mom with his stick pen.  Mom got so mad she smacked him with her ruler.  The class, including the teacher, heard the smack.  Mom thought she would get in trouble but instead she noticed Mrs. Maple turn away to hide her smile.  I guess she thought Ted deserved what he got.

Mom was also a hard worker, a wonderful cook and a great home maker.  She was intelligent and very creative.  She started oil painting later in life and did fantastic paintings.  We laughed at her when we played Pictionary because she was not able to draw a simple, quick picture.  She painstakingly tried to draw a perfect picture but she always ran out of time.

Mom was the daughter of Carl and Clara Sandboe.  She was born on September 27, 1920 in LaGlace.  She was their first child and she was delivered by a midwife in the house where Ed and Guero Torgerson lived, about a mile north of LaGlace. Carl and Clara had six other children and the bond was very strong with the Sandboe family.

Mom married Olaf Angen on June 21, 1941.  They had three children – Garry, Gail and Rosemarie.  They had four grandchildren and six great-grandchildren.  Family was so important to Mom and she treasured time spent with family members.

Mom lived her final years in Pioneer Lodge and she died on December 7, 2015 at the age of 95 years. 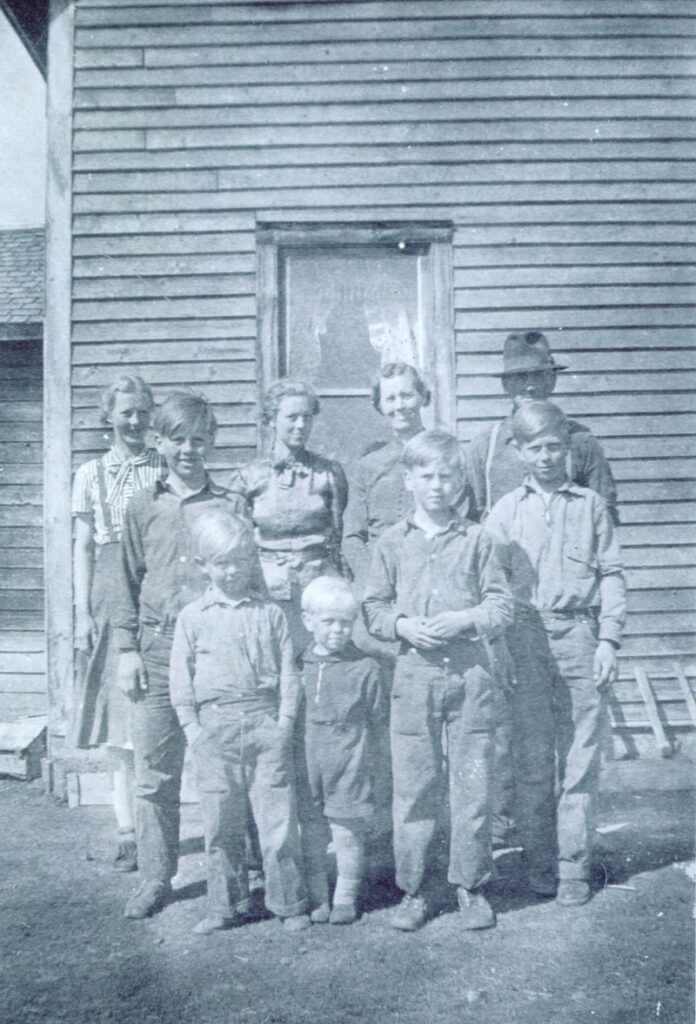 The South Peace Regional Archives publishes a quarterly multi-page newsletter to include submissions and stories from the public. It is available online, at the Archives, and is mailed to members of the Society.

Read the PDF version of Telling Our Stories Volume 4, Issue 4 and visit our Newsletters page to view past issues.

Update: We have been able to identify the above photograph! It is of the 1951-52 Beaverlodge class – the names of the students are available on our Facebook page, where we received a great response from the community. Thank you to everyone who helped us identify this photograph!

Earlier issues of “Telling Our Stories” are available online, or you can become a member of the South Peace Regional Archives Society and receive it in the mail!