Hector Botten came to Canada from Portsmouth, England around 1929. He and his friend, Johnny Coates, sought adventure and were especially interested in owning land in the Canadian frontier. Hector filed on a homestead in Sylvester area (near Elmworth). He became friends with Mr. and Mrs. Bob Frame of Elmworth, and he lived with their family for 12 years, helping with the farm chores. When World War II broke out, Hector was determined to join the army, and was delighted to be accepted in February 1942. He was at the Grande Prairie Military Training Centre only 2 months when he contracted pneumonia, and sadly he died on April 14, 1942. It was the first death at the training centre. On April 16 Hector was given a military funeral, and was buried at the Grande Prairie Cemetery. Hector’s mother and brother were still in England. According to Bob Frame, Hector was a “man of highest principles” and of “cheerful disposition”. Mrs. Frame kept in touch with Hector’s mother for many years afterwards. In 1974 Hector’s brother came from England to visit Mrs. Frame, who was living in Hythe at the time, to thank her for making a home for Hector. 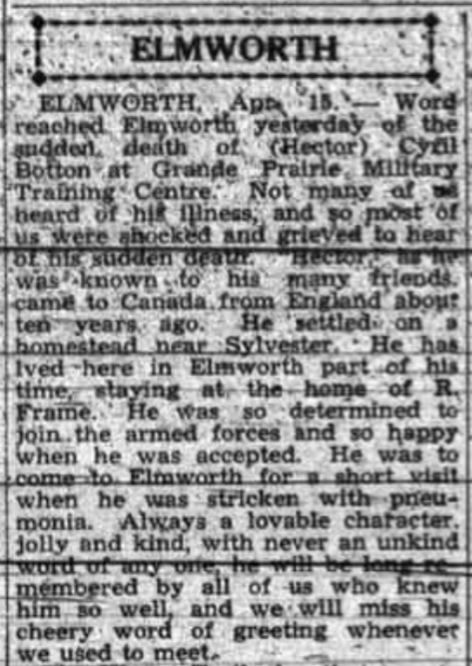